Promo: Lily of the Valley by Sarah Daltry

Summary:
You met them in Forget Me Not. Now, hear Jack’s story.
Plagued by a dark past, Jack sees college as a way out. Desperate to escape the area where he grew up, the people who know his secrets, and his own family, he deals with his problems through alcohol and sex.

When he first sees Lily, she’s the epitome of everything he hates. Yet something about her makes Jack rethink everything he knows and assumes about other people. Now, with the help of his best friend and lover, Jack has to decide if he wants to pursue something that he knows will only end badly.

Can Lily be one of the few people who can see Jack for who he really is – or will his darkness be too much for her to handle? 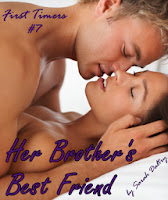 Summary:
The short story that led to Forget Me Not!

For years, Lily's had a crush on her brother's best friend, Derek. He never notices her, though, so their relationship is only in her mind - and in her bed when she's alone. When he walks in one night as she's getting off thinking of him, neither can deny their attraction any longer. Also in "First Timers Vol. 2!"

Summary:
Lily had a crush on her brother's best friend, Derek for years - which led to their steamy night ten months ago in her bedroom. Now, Lily is going off to college and she and Derek are still going strong. However, when school starts, she realizes it's hard to maintain a relationship while also trying to live her own life. She and Derek find themselves falling apart and Lily has no idea where to turn.

Enter Jack. Everything about him is wrong for Lily and she knows it, but she can't stop herself from being attracted to him. When things implode with Derek, it's Jack who is there to pick up the pieces - and show Lily an entirely new set of experiences she didn't know she was missing.

Of course, Jack has his own problems and once Lily gets to know him better, she starts to wonder if she can handle all of Jack. When Derek reappears on the scene, Lily is forced to decide between two guys and herself. Can she find herself without losing the people who matter in the process?

Note: This is a work intended for readers 18+ as it features explicit sex between people in college. See where it began in the short story, "Her Brother's Best Friend."

Bio:
Sarah Daltry writes erotica and romance that ranges from sweet to steamy. She moves around a lot and has trouble committing to things. Lily of the Valley is her third full length novel, although she also has several story collections and two novellas available. Her other novels are Forget Me Not, the story that tells Lily's version of events, and Bitter Fruits, which will be released 12/1/2013 from Escape Publishing.

Sarah has spent most of her life in school, from her BA and MA in English and writing to teaching both at the high school and college level. She also loves studying art history and really anything because learning is fun.

When Sarah isn't writing, she tends to waste a lot of time checking Facebook for pictures of cats, shooting virtual zombies, and simply staring out the window.