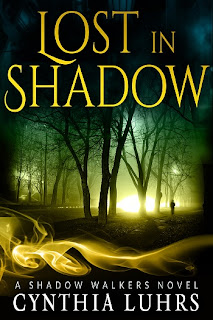 Book Description:
We were wrong…ghosts are frighteningly real.

For centuries a war has been raging between light and shadow. Shadow Walker pitted against Day Walker, threatening to plunge the world into darkness. Colin, an ancient warrior, lost hope long ago. Now he prowls the streets of Edinburgh eviscerating those who prey on humanity.

Emily possesses the ability to see beyond our realm into the dangerous realms of Light and Shadow. Unwittingly drawn into the shadows when she intervenes to help Colin, igniting his long-buried desires, she unleashes a terrible curse. Now with a week to break the curse, time is running out as they are locked in a deadly fight with forces that will stop at nothing to destroy them before they succeed.

Intensely romantic and thrilling, Lost in Shadow portrays the struggle between redemption and retribution.

Cynthia Luhrs is the author of the Shadow Walkers novels. A graduate of Towson University, she was practical, majoring in Business which served her well now she's a writer and needs to stay organized. Prior to becoming a full-time writer, she toiled away in Corporate America for many years. Her idea of a perfect day is no interruptions and the freedom to live in her head all day, writing to her heart's content, an icy cold drink next to her as she creates the next Shadow Walker book. Of course her cats frequently disrupt this oasis of serenity.

Excerpt 1:
Colin was moaning, thrashing about, in the throes of a nightmare while unconscious. On the bright side, at least he wasn’t dead. She’d kept him warm against her, promising anyone who was listening she’d give up chocolate, Pepsi, and wine if they’d let him be okay and get them out of here.

Swearing, Colin couldn’t hear over the infernal racket. And why was water dripping on him—were they going to drown in this godforsaken tunnel? Sitting up, his head spun.

“Wait, you’re hurt. A rock hit you on the head. There was so much blood, I tried to stop it but you wouldn’t wake up.” Drying her eyes and hiccupping from crying, Emily helped Colin sit up.

“I thought you were lost in the shadows, it’s been so long—I can’t find any way out, there’s an awful scrabbling noise. I think the rats are back. It’s terrible having an overactive imagination. I’m not normally such a mess but I kept thinking the rats would get in and eat us alive.” This last bit was said on a particularly unladylike hiccup as Emily pulled herself together.

“Do you think you can stop hiccupping so I can listen for this scratching you heard? Shall I scare you to make the hiccups stop?” Colin smiled thinking how brave she was, taking care of him while she was afraid. She was strong whether she believed it or not.

Listening, he could hear faint noises. This was good; the rats knew how to get out. If he could pinpoint where they were, there was a chance he could find a way to escape. Hell, being trapped while he was injured afforded him some peace from worrying about the bloody Day Walkers killing him while he recovered.

Deciding the noise was coming from the right of them, Colin started digging, removing stone, placing it on the path behind them. If the Day Walkers found the entrance, at least they’d have to remove the stone. They couldn’t materialize past it since they couldn’t see where they were going. You had to know where you were going or you might end up embedded in a wall. While it wouldn’t kill you, it might be a hell of a long time before you got out.

The bloody stone was heavy; his arms were straining. Pulling a particularly heavy chunk out of the debris, Colin jerked as another rib broke. It must have been fractured and snapped from the strain. He stopped a moment as dizziness and nausea threatened to make him look like a girl.

Gah, damnit to hell, it hurt like a bitch. Focus, you prissy girl, keep going, ignore the pain.

“Ouch!” Emily winced next to him.

Taking her hands in his, Colin examined her fingers; she had snapped off or ripped off each nail down to the quick trying to help remove the stone. “Lass, stop, you’ve destroyed your pretty nails. I liked the color, reminded me of a bronze shield I once had.” Anger filled him; she’d been injured because of him. If she hadn’t trusted him, none of this would have happened. She’d never cried out; simply kept digging. She had a spine of steel which he admired.

“You’re in shock. Now lean as close to the wall as you can.” With a grunt and a heave, the boulder came rolling past her to land at their feet. Air came rushing in, along with the sound of…rats.

“I’ve never been so happy to hear those dirty little creatures.”

Reaching for Emily’s hand, Colin first had to wipe his hand and forearm off on his kilt; he must have re-opened one of his injuries, it was bleeding again. He didn’t care about the blood, he didn’t want to worry Emily.

“It’s another tunnel. We’ll follow the rats to safety. Take my hand; it’s tall enough we can stand up.”

In the darkness, he felt her wince as she placed her hand in his. Stopping, he cursed. He should have taken care of her when he realized, not waited. Ripping what was left of his tattered shirt, he bound her hands to cushion the tender fingertips.

“There, there, this will help. Once we are safe, we’ll have them tended to. Are you okay?” He stroked her cheek.

“Most men would have screamed like girls—ripping a fingernail off hurts like hell.” Admiration filled his voice.

Turning a corner, air blew in ruffling their hair, the sound of water trickling by their feet, the rats scurrying to freedom. Ahead, he could make out a dim light. Reaching the end of the tunnel, they came to a stone wall. The rats were scurrying out; air and water coming in…there had to be a door here somewhere.

Excitement filled his voice, “Feel every inch of the wall…” Colin paused for a moment thinking of earlier, her warm hand on his thigh…what it would be like to have her hands exploring every inch of his body. Mentally eye rolling, he continued, “There has to be a lever in the stone we can press to free us.”

Exploring every inch of the wall, a thud sounded as Colin pushed in on a stone rosette. Light flooded into the space as Colin pushed with all his might, the heavy door swinging open, leading them outside into the late afternoon.

Sagging with relief, Emily wheezed. “You distracted me so I wouldn’t flip out. You’re nice when you’re not being grumpy.”

Hugging Colin tight, she stood on her tiptoes, kissing his cheek. “Thank you.”

Desire surging, his control snapped, pulling her tightly against him, he captured her mouth in a demanding kiss, invading her with his tongue, bruising her lips; he wanted to crawl inside her, take her there against the stone wall, on the banks of the water.

Arching against him, she ran her hands over his back and arms, feeling his strength, his wounds—and the blood. A bucket of cold water would have had the same effect. She pulled away, “You’re bleeding and badly injured, we have to find help.”

“Damn the bloody injuries.” Growling at the distance between them, he shook his head to clear it. The worry on her face brought him back to his senses.

“Aye, we need tending, though I’d rather stay here and kiss you senseless. We’re close to the Black Swan. It will be safe for a bit, we can get you bandaged up, a hot meal, drink, and then rest. In the morning I’ll arrange a ship and we’ll set sail up the coast, somewhere safe.”

Daylight was fading, the late afternoon shadows would help hide them from prying eyes. There was a path running along the water, ending at the back door of the Black Swan. Robert could help them with a ship. They’d go to Ravensmore. Fury ignited him, thinking of Rawlins and others trying to hurt Emily.

The thought kept eating at him. They couldn’t know about the curse, what it meant, could they? He’d cut down every last sonofabith before he’d let any of those filthy bastards lay a hand on a single strand of Emily’s hair.

MINE...no one would touch his woman.

No purchase necessary. Must be 17 years of age and older to enter. Must reside in countries able to receive eBooks via email. The retail value of the eBooks is $3.99 USD. The number of eligible entries received determines the odds of winning. Winners will be selected after July 2, 2013 randomly by Rafflecopter. Entries will be reviewed for accuracy. Peace, Love, Books and AToMR Tours are not liable for purchasing, shipping or emailing the items, winner not receiving the items, or lost items shipped/emailed. This sweepstakes is sponsored by the author and eBooks will be provided via email by the author. If the items are not claimed via email within 24 hours of receiving notification the item will be forfeited with no winner or an alternate winner may be selected at blog’s discretion with email verification by July 6, 2013. Any taxes associated will be paid by the author unless otherwise stated. Peace, Love, Books has the right to obtain and publicize the winners name and likeness. Void where prohibited by law.
Posted by A Passion For Reading at 8:01 PM