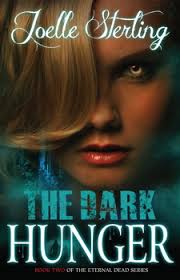 Synopsis:
In this second installment of the Eternal Dead Series, normal reality is turned upside down as Holland and Jonas attempt to restore their taboo love amidst a dire clash among witches, zombies, and vampires. Since the demise of their leader, vampires have threatened to take over the peaceful town of Frombleton, brazenly roaming the streets while mingling with society and feeding on humans. And if that’s not bad enough, a zombie outbreak that was isolated to a separate rural area is slowly creeping toward the city, leaving a trail of ravaged corpses in its wake.

Hundreds of miles away at Stoneham Academy, Holland Manning is learning the ancient art of witchcraft and practicing her emerging occult powers. After discarding her nerdy girl image, Holland is finally well liked and admired for the first time in her life, but she’s finding it difficult to enjoy her newfound popularity when she’s aching for her true love, Jonas. A soul-stealing hex has forced Jonas to return to his homeland in search of a cure, and Holland is eagerly waiting to find out if his humanity has been restored.

Chilling and suspenseful, The Dark Hunger recounts the horrors of humans living among the undead—and the uncertainty of forbidden love amidst sinister forces.

EXCERPT:
Standing in the entryway of the dining room, Holland Manning surveyed the room in awe. The dining room at Stoneham Academy was nothing like Frombleton High’s cafeteria. For starters, the ultra-modern space was flexible, serving as an upscale eatery and a commons area. Located under a 15,000 square foot vaulted skylight, the vast, sunny room was surrounded by a colonnade and accented by wide stairways, balconies, and archways.

She noticed that the students appeared to be extremely well mannered. Holland watched the girls lining up at the gleaming chrome and granite counter to place their breakfast orders, and marveled that there was no shouting, no shoving, and no unkind comments or slurs. Stoneham was nothing like her old school. Naomi would love it here, Holland thought, and then swallowed a knot of sorrow. Her best friend, Naomi was gone—her human life extinguished when she was turned into a vampire. She couldn’t get the memory of Naomi’s death out of her head; her friend’s horrific screams constantly echoed in her mind.

“Are you okay?” a concerned voice inquired.

Holland pushed away the ghastly recollection and found herself looking into the curious brown eyes of an Asian student.

“Holland Manning.” Holland’s scanned Tami’s outfit. A girl like Tami would have stuck out like a sore thumb in Frombleton where everyone subscribed to a cookie cutter style of dressing, but here at Stoneham, where girls were encouraged to express their individuality, Tami looked trendy.

“I love your outfit,” Holland complimented.

“That’s impressive. New students are only enrolled during their sophomore year. The school doesn’t admit new juniors or seniors. That’s the policy.” Tami shrugged. “Oh, well, your magic must be pretty powerful for the school board to bend the rules.”

“I’m not so sure about that.” Holland lowered her eyes bashfully.

“Don’t be modest. You can’t attend Stoneham without abilities. So, tell me— what are yours?”

Holland shrugged. The only thing special about her was her vamp-killing blood, which wasn’t something she wanted to talk about. She could have kicked herself for not taking the time to peek inside one of her mother’s spell books to learn a few magic tricks before coming to Stoneham.

“Hey, don’t stress over it. I’m sure your abilities are awesome.” Tami patted Holland’s arm and steered her out of the entryway and into the ding room. “I’m starving; let’s get breakfast.”

Walking beside Tami, Holland looked around and was surprised by the welcoming smiles that were cast her way. Stoneham was like another planet. At her old school, she was more likely to get the finger before she’d get a friendly smile.

“Your omelet, wheat toast, and green tea is coming up, Tami. What’re you having, Holland?” Ms. O’Malley asked.

Holland looked at Tami questioningly. “Do you have a standing order?”

Tami grinned. “I transferred my thoughts to Ms. O’Malley. That’s one of my abilities.” Tami gave Ms. O’Malley a wink.

Thoroughly impressed, Holland returned her gaze to the menu. “I’ll have the same as Tami. But I’ll take a cappuccino instead of green tea.”

Holland followed Tami to a table where they were soon joined by two other girls. “Hi Sierra and Giselle,” Tami squealed.

“How was summer vacation?” asked Giselle, a tall girl with a killer body and long waves of blonde hair. From the sunglasses perched on her golden head and down to the red-bottom shoes on feet, Giselle was swathed in expensive, designer wear. With all those pluses, Giselle’s obscenely beautiful face was sort of overkill. Holland felt an uncomfortable prick of envy and averted her gaze away from Giselle.

“My summer was a bore,” Tami replied with her mouth turned down. “I couldn’t wait to get back to school.”

Sierra was a slender black girl with a chest so noticeably flat, Holland wondered if she could even fill out a training bra. Sierra had a cute face a really cool hair that was close cropped and tinted pink.

“My summer sucked too,” Sierra admitted, shaking her head. “I tried to fit in with the kids in my neighborhood, but it didn’t work. They still treat me like an outcast. I ended up hanging with my auntie all summer, and that turned out to be a disaster.”

Tami gave Sierra a sympathetic look and Holland was waiting to hear what kind of disaster happened with Sierra’s aunt, but Tami interjected before Sierra delved deeper into her story. “It’s so hard to fit in with regular girls. You have to hide your abilities and that’s so uncomfortable. It’s like living a lie.”

“I’ve been pretending to be a regular girl my whole life,” Giselle commiserated. Holland shot Giselle a sidelong glance. There was nothing regular about Giselle. With her perfect features and enchanting pale blue eyes, she was as pretty as a film star. Furthermore, she reeked of money, and was obviously accustomed to sumptuous living. Giselle gave the impression of being pampered and super confident, not someone struggling to fit in.

“Not only do the kids in my neighborhood think I’m weird, my family and I are on the outs,” Sierra added solemnly. “I don’t know how I’d survive without school.”

Having nothing to contribute to the conversation, Holland quietly munched on her omelet. As the other girls began digging into their breakfast, Holland observed Tami and Giselle sharing a look. Feeling self-conscious, she wondered if Tami was speaking to Giselle telepathically—telling her about Holland’s lack of sorcery skills.

Moments later, from Giselle’s side of the table, a packet of honey elevated from the sugar and condiments container and floated toward Tami.

“Thanks, Giselle,” Tami said pulling the honey packet from midair. Smiling in satisfaction, she squeezed honey from the cellophane packet, into her tea.

Sierra gave a wry smile. “You two are such showoffs.”

Relieved that Tami had been making a request for a packet of honey and hadn’t been gossiping about her, Holland relaxed and attempted to socialize. “So, what’s your, um, gift?” Holland asked Sierra. She immediately regretted prying when she noticed the sad look in Sierra’s eyes.

Sierra opened her mouth and then closed it. Her eyes shifted back and forth anxiously, like she was trying to come up with an acceptable response.

“That’s cool.” Holland said casually. Sierra’s gift was actually amazing, but Holland didn’t want to gush over the girls’ powers. Just like in her old school, she was starting to feel like an outsider. It was a little embarrassing not to be able to do any witch tricks. She glanced at Sierra. “Can you, like, stick your hand through mirrors and walls?”

“Uh, yeah. Sometimes,” Sierra muttered, biting her lip and looking away. Clearly, something was bothering Sierra, but Holland didn’t pry.

“What about you?” Giselle asked. All three girls peered at Holland with great interest.

“Nothing in particular,” Holland responded, deciding not to freak-out her new friends with the disclosure of her vampire-killing blood. Most people—even witches—had no idea that vampires actually existed.

“I’m a work in progress, I guess.” Holland chuckled uncomfortably, and then sipped her cappuccino. She noticed the three witches exchanging looks, and once again she wondered if Tami was secretly talking about her.

The first half of the day was devoted to regular classes: English, Algebra II, and Roman History. Boring! Things got more exciting after lunch with Divinatory Arts, Latin Incantations, Dream Working, Healing Arts, and Spell Casting.

Each afternoon class was more exhilarating than the last. Well, at least most of them. Latin Incantations was a snooze fest, but all the other classes, especially Dream Working held Holland’s undivided attention.

In Dream Working class, the students were being taught how to consciously dream. Holland was eager to try out what she’d learned when she went to bed tonight. Since she hadn’t been able to communicate with Jonas during her waking hours, she felt hopeful that she’d be able to make contact with him in her dreams.

In the midst of Spell Casting class, there was a message over the intercom that Sierra was wanted in the headmistress’s office. All eyes turned to Sierra as she gathered her books and stuffed them in her backpack. Sierra gave Tami and Giselle a forlorn last glance and then exited the classroom.

A buzz immediately erupted in the classroom as the students began to speculate about why Sierra had been called to Ms. Livingston’s office. Even after the teacher demanded that everyone quiet down, Tami and Giselle continued their discussion—telepathically.

Book Links:
Goodreads: http://www.goodreads.com/book/show/15803568-forbidden-feast
Posted by A Passion For Reading at 10:06 PM