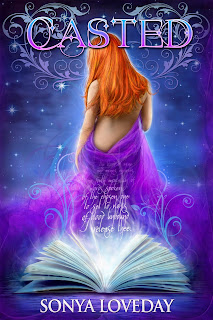 Summary:
“My mind absorbed everything in the spell book I clutched tightly to me. Pages ruffled inside of my head, urging me to remember things and then to forget them. Voices chanted with tempo rising at the breaking points of pain until the book vanished and words to an ancient spell scribed across my arms. Each stroke brought blood to the surface, imprinting words I could not read; words that would forever change who I was.”

Jade had spent the majority of her life running from the Triad. The Triad, are a powerful group, who would stop at nothing to obtain Jade and the missing spell book for leader, Lorenzo’s, nefarious plans. And now that she has absorbed the highly coveted magic contained inside the missing book, there is nowhere left for her to hide.

With the help of her friends, Jade steps out from the shadows and learns how to fight back. But no one is prepared for Elinor-the woman bound inside of the book that’s trapped in Jade’s mind. Now she not only needs to protect herself from the Triad, but from what’s hiding inside her mind as well.

Jade never expected the answer to it all would revolve around love.

Edge is dark, mysterious, and a sworn member of the Triad. He also hides a secret past that threatens the thin line he walks between good and evil. Lives are at stake when Jade and Edge’s two worlds collide. Can Jade learn to trust him when he says he is her pre-ordained and vows to do everything he can to protect her? But more importantly, can she trust herself and the woman in her mind?

Sonya Loveday, first and foremost is a reader, an avid one. It is of that love that brought her to the realization that this was the answer to the nagging persistent feeling that ‘there’s got to be something more’.

The dream came alive in 2009 when she purchased her laptop and began the tedious step of becoming a published author.

When she’s not reading, she’s writing. When she’s not writing, she’s reading. And when she’s not doing either of those things she’s sleeping, shuttling her children back and forth to school, letting the dogs and cats in and out of the house for the umpteenth time in the last hour and dreaming of a clean house.

You can find Sonya Loveday on Facebook, Twitter, Goodreads and Wordpress on the links below:
http://www.facebook.com/sonyalovedayauthor?ref=hl
http://www.goodreads.com/user/show/11660396-sonya-loveday
https://twitter.com/SonyaLoveday - @SonyaLoveday
www.sonyaloveday@wordpress.com
Posted by A Passion For Reading at 12:00 AM