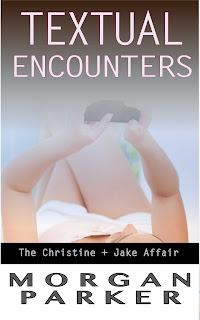 Synopsis:
Katie discovers an unlocked iPhone in the back seat of a taxi. But instead of turning it in to the driver as lost, she decides to keep it for herself. Outside of the usual clutter you would expect to find on a smartphone, what captures Katie's interest is the single conversation she finds on the phone's secure text messaging service, a three-month dialogue between a woman with an uncertain past named Christine and a single, eligible man named Jake. What starts out as a message intended for someone else ends up being the beginning of a relationship more powerful than anything Christine or Jake have ever experienced.

Review:
This was a very different format of a book. The book was mainly text messages like in the excerpt. It was pretty easy to follow, Christine's texts was on the right side, and Jake's texts were on the left side. The only problem with this format is that I was constantly wanting more information, and not getting it because we only saw texts.

It was really hard for me to like the main character of this book. She had some serious moral issues that really bugged me. On what earth is it morally okay to keep an Iphone that someone accidentally left? Looking out the window of a cab is not considered actually looking for the owner. She was a tad too materialistic for her own good. And the decision she made at the end of the story had me rolling my eyes.

The relationship between Christine and Jake constantly had me guessing. It was full of deceit. I was shocked about some of the discoveries unearthed. Then, when I found out about the first one, I constantly was trying to see if I saw anymore before they came up. It did have me constantly guessing what things they had omitted from each other. As their texting relationship grew and then they met in real life they became more passionate and intimate. They both quickly realized that things can be really complicated through long distance relationships.

I think seeing there was a couple of sexual reference, but it wasn't overly graphic that this would be okay for 16 and up. Even though I am not completely sold on Katie's character, I will read the next book just to see where this grows. Who knows maybe she will actually have some personal growth.

Author Bio:
Morgan Parker is the pen name of someone who thinks he is more important than he really is. At 38 years old, Morgan has two young children and is married to a woman who puts up with his self-diagnosed hypochondria and literary obsessions.

8:03pm:
Did Melissa tell you that Peter was abusive?

8:04pm:
Of course she didn’t, because she never knew that part of him.

8:05pm:
I bet she didn’t tell you that he doesn’t even know that I live in the same city as he does. Of course she didn’t, because she never asked me about Peter when I texted her two weeks ago.

11:38pm:
I’m curious, Jake. How did Peter come up in your conversation with Melissa? Were you asking, or did she volunteer. Because if you were asking, then I have to wonder why you never asked *me*.

11:43pm:
Peter and I met in high school. He was the greatest guy I’d ever met. Smart, handsome, extremely charming. He was a year younger than me and all of the girls in the school wanted to be with him. So to have him to myself, to have “won” him, I felt pretty special.

11:45pm:
Anyway, Peter and I were together eight years. We tolerated each other through my last year in high school and my four years of college. By the time I finished my CPA, he hit me five times. He threatened to kill me six *thousand* times. I guess it depends on who you ask, but that is either five times too many, or six thousand times too many, but for me it was both.

11:48pm:
I moved to New York with him for two reasons. The first is that he proposed to me once he was offered a job at Arthur Andersen and I was afraid to say no, and the second is because I saw New York as my last and only opportunity for a fresh start. In Chicago, I didn’t think I could break free the same way. He had so many friends to keep an eye on me, he knew where to find me, etc.. So I tagged along.

11:52pm:
Our first week in NYC, I had six interviews, three in one day, two the next and the last one on Friday. I didn’t make the Friday interview because I was in the hospital. When I showed up for the second round of interviews the following week, I never heard back from two of them. I’m sure you can figure out why.

11:55pm:
When I met Melissa, I was still with Peter. It was optics by then, Jake. Of course we were high school sweethearts. Of course I *loved* him more than anything. Of course we were planning a huge wedding on Long Island, my dream wedding that was *fit for a princess.* Of course we were trying to have children. And of course Melissa saw two people madly in love with each other.

11:57pm:
That’s how these kinds of relationships work – all about what it *looked* like. I didn’t want to make another trip to the hospital!

11:59pm:
When Andersen promoted Peter to Toronto, I promised him I would follow. Would you have told him anything different?

12:01am:
I packed all of our stuff and shipped it out with him. Even my stuff because I was allegedly on the verge of getting transferred myself. It was easier to have it there waiting for me because then he knew I was serious about making the move, right? And if he knew I was serious, he would give me the space I needed to find my next job without telling him anything about it.

12:03am:
I had to take these kinds of steps because if Peter ever returned to NYC to hunt me down, I couldn’t risk him walking down whatever street I decided to move to and recognizing an old lampshade or anything else that I might put out for the trash. Call me paranoid, but would you have taken that chance?

12:05am:
So to address your comment about following him to Toronto, are you smoking fucking crack? Moving here is not *following him*, it’s either being dragged or tiptoeing delicately around a sleeping bear.

12:06am:
I love you Jake, I really do, but next time it might make better sense to ask me directly.